From The Viking Age Compendium
Jump to: navigation, search

This article's completion rating is 1 out of 5. Article planned for future work. No real progress to date.

This article's completion rating is 1 out of 5. Article planned for future work. No real progress to date.
Viking Age Compendium articles on Furniture & Storage:

Although the terms chest, casket and box are not well defined, here we have used whatever term is commonly applied to the item in the associated published literature. Petersen defines the difference between caskets and chests by stating that chests should be large, with strikingly large carrying-rings, hinges and keys. [PETERSEN 1951]:p.532 Arwidsson & Thorberg class anything under 1m in length as a casket (Kasten), anything less than 25cm in diameter or length as a box (Buechse). [ARWIDSSON 1989]:p.113

In Hedeby 10 boxes were found in 9 graves, of these only 2 were male graves. The majority of caskets from Hedeby were in female chamber graves. Eisenschmidt also references to another piece of her published works where she states that metal covered caskets are known from 50-60 graves in the area of Old Denmark. [ARENTS & EISENSCHMIDT 2010A]:p.166-168

Used instead of cupboards [Roesdahl 1982]. Sometimes converted to be used as coffins.

Isle of Man, Cronk yn How 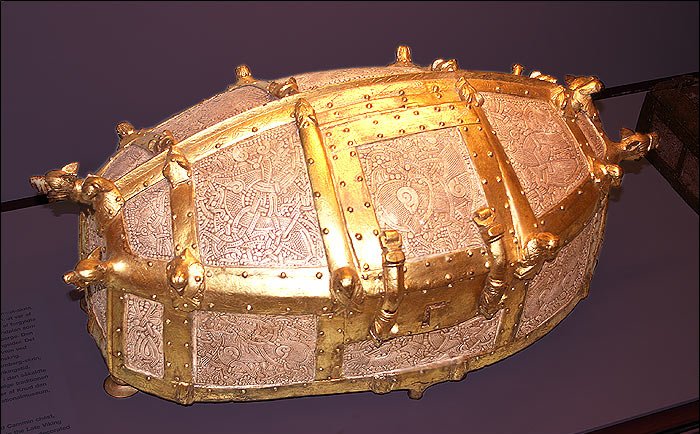