From The Viking Age Compendium
Jump to: navigation, search

This article's completion rating is 3 out of 5. Article data has been collected but still needs to be summarised.

This article's completion rating is 3 out of 5. Article data has been collected but still needs to be summarised.
Viking Age Compendium articles on Spears and Banners:

The catalogue follows Thålin groups and then subdivided by Petersen's [PETERSEN 1919] types. Winged spearheads have been ground together in their own section and also include finds from outside of Britain. Each entry consists of the following components:

Leaf-shaped Spearheads (Pre 900AD)
Petersen Types A-E
Group 1 consists of Petersen types A, B, C, D1 and E. They are all types with a lancoid blade and gradual transition from socket to blade.

Angular Spearheads with Short Sockets (950-1075AD)
Petersen Types D2, G & H
Group 2 consists of Petersen types D:2, G and H. They are all types with edge shoulders placed low on the blade and a short conical socket with marked narrowing below the blade.

Fuglesang includes the winged spears of Petersens type D2 in with this group as she removed wings as a determinant of typology making Petersens D2 and G types the same.
It has also been suggested by Fuglesang and Petersen that type G spearheads without wings may be of eastern origin with the majority of finds coming from Sweden and Finland. A few decorated type G spears have been found with Urnes style decoration.

Fuglesang has studied the K & M types of spearhead that are decorated in Ringerike designs. Due to difficulty in determining the exact typology of many of these spearheads she has introduced a new K/M type that falls between those of Petersens K and M [FUGLESANG 1980].

Isle of Man, Ballateare (I)

The following spearheads are referenced but have both no associated image and no type mentioned.

The following spearhead remains are either too fragmentary or have been lost so that a type cannot be ascertained. 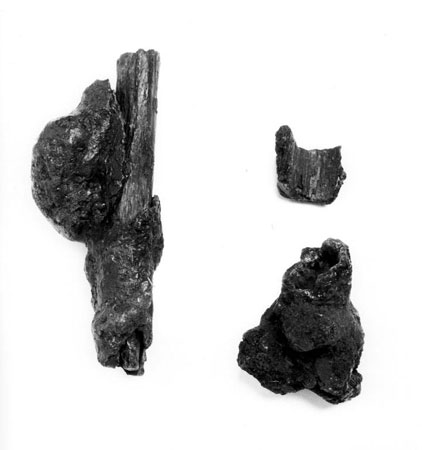